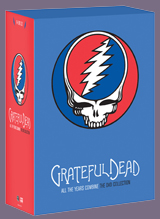 All The Years Combine: The DVD Collection

Only at ShoutFactory.com, this set will come with a free bumper sticker (10″ x 3″) available nowhere else, while supplies last

The definitive visual anthology of one of the most prolific and celebrated live bands of all time.