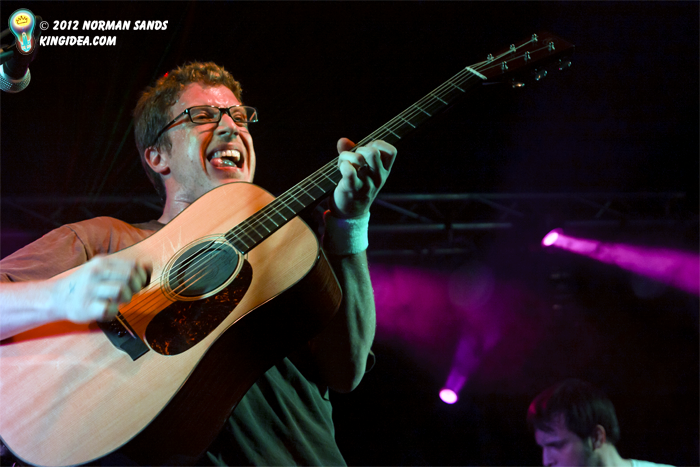 Chicago-based quartet The Leadfoot Band founded itself on bluegrass roots almost a decade ago and have branched out from there. Their influences include everything from The Band to Hank Williams, Sam Bush to Metallica, Split Lip Rayfield to Lou Reed and everything in between. Reformed in 2011 after more than a five-year hiatus, they have picked up steam and spread the wings of possibility, pushing their hard-driving, high-octane brand of bluegrass, roots, and rock-influenced acoustic music farther than before. This robust musical delicacy tantalizes the senses and gets the feet moving. It is a smokin’ blend of styles suitable for any palette, summed up perfectly by musician Jaik Willis: “Chicago’s freshest post-bluegrass served up spicy- just how you like it- with tasty grooves and lightning-fast delivery.” Leadfoot is releasing their first album in six years, self-titled “The Leadfoot Band,” produced by Josh Shapera in Chicago with guest musician Pat Sansone of Wilco on keys. Breaking it down to the bare bones of strings, the band’s lineup includes Steve Haberichter on mandolin, Mike Vanier on acoustic guitar, Garrett ‘Geebs’ Degnan on bass, all held together with the tight rhythm of Mike Holtz on a minimalist drum set. The band produces more sound than one would expect. Tied together with three-part harmonies, The Leadfoot Band’s multi-dimensional grooves vary from intense, to pocket groove, to two-steppin’, to straight bluegrass and Newgrass, to plain straight headbanging. Not what you normally get with a string trio and snap drum kit; The Leadfoot Band is definitely not your normal acoustic quartet. The band has played all around the Midwest from Michigan to the Rocky Mountains, playing with such artists as Sam Bush, Railroad Earth, Drew Emmitt Band, Darol Anger, Split Lip Rayfield, Acoustic Hot Tuna, Bill Nershi (String Cheese Incident), Hot Buttered Rum, Particle, Jeff Austin & Dave Johnston (Yonder Mountain String Band), Vince Welnick Band, Vince Herman (Leftover Salmon), Sarah Watkins (Nickel Creek), The Special Consensus, and The Iguanas to name a few.