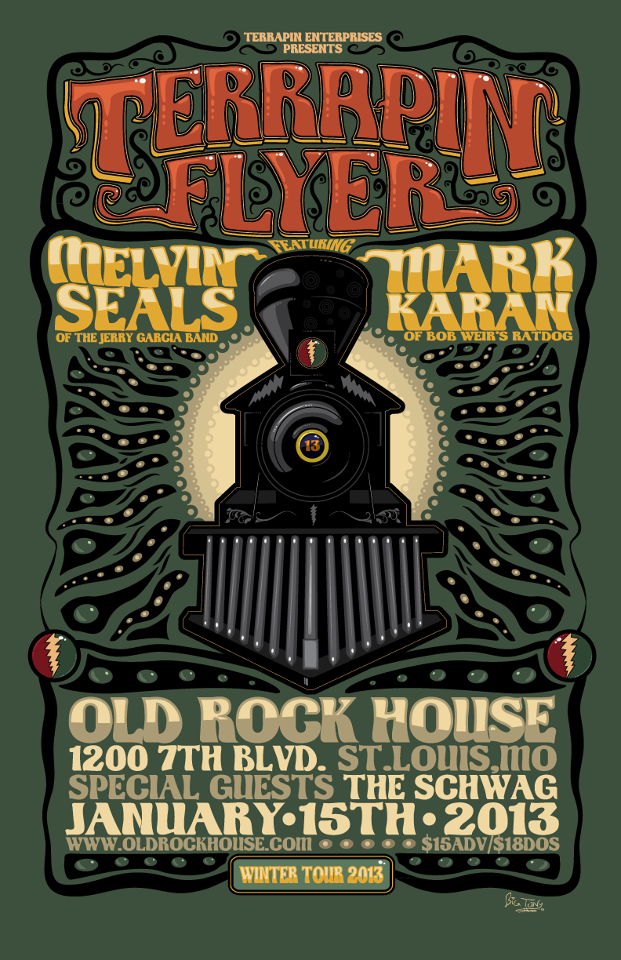 Of the many facets that constitute the Grateful Dead experience, there are two which have provided much comfort to Deadheads in the era since Jerry Garcia’s passing in 1995: the built-in ability for the band’s music to evolve with each performance and the wealth of talented musicians that has sprouted up around its core players.

Terrapin Flyer, a Chicago-based Grateful Dead inspired band, will extend each of these legacies at an upcoming show at Martyrs’ in Chicago, IL on January 19th, 2013 which will feature two of the most beloved members of the Dead’s extended family: organist Melvin Seals and guitarist Mark Karan. A follow up to their successful 2012 tour, the 2013 run will find these accomplished performers reuniting to find new ways to express and evolve the vast songbook of the Grateful Dead and its offshoots.

Melvin Seals played Hammond B3 organ in the Jerry Garcia Band for 15 years and has honored Jerry’s legacy with his band JGB in the years since. He is considered one of the finest Hammond B3 players in the world and was revered by Garcia, and his legion of fans, for bringing authentic gospel, jazz and R&B sensibilities to the improvisational realm.

Mark Karan was tagged as lead guitarist when original Grateful Dead members reconvened as The Other Ones in 1998 and filled the same role with Grateful Dead rhythm guitarist in Bob Weir’s Ratdog for 13 years. More recently, he has made frequent appearances with former Grateful Dead bassist Phil Lesh at Lesh’s newly-opened Marin County club, Terrapin Crossroads. Mark has a unique ability to express himself musically on these familiar tunes without sounding derivative of Garcia.

Terrapin Flyer utilizes a revolving lineup of the nation’s finest musicians and is committed to performing with inspired authenticity and precision. This tour will also feature “Wavy” Dave Burlingame from the popular band Cornmeal and JP Nowak who recently left Cornmeal after 10 years in that band. On past tours, Terrapin Flyer has featured former Grateful Dead keyboardists Vince Welnick, Tom Constanten and Bob Bralove. They have headlined major festivals, performed at prominent venues across the country and are recognized as one of the premier Dead-inspired bands on the circuit. – Steve Siegel