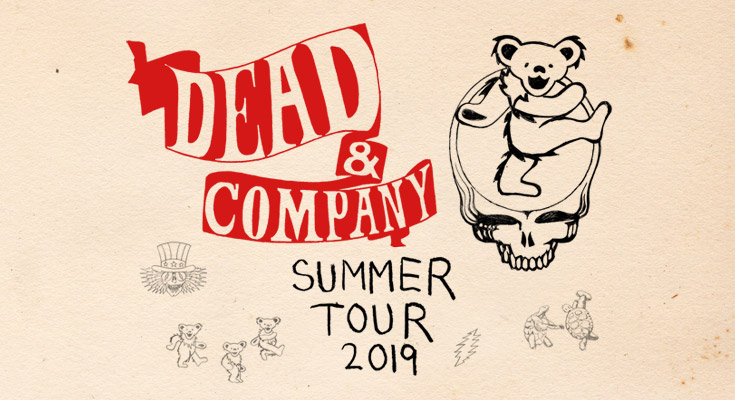 DEAD & COMPANY –  Mickey Hart, Bill Kreutzmann, John Mayer, and Bob Weir, with Oteil Burbridge and Jeff Chimenti – announces its 2019 tour, kicking off on Friday, May 31st and Saturday, June 1st in Mountain View, California at the Shoreline Amphitheatre and returning for two-night stands at iconic venues such as the Hollywood Bowl, Wrigley Field (Chicago), The Gorge Amphitheatre (George, Washington), and Folsom Field (Boulder, Colorado), as well as a concert at the New England Patriots’ Gillette Stadium. A full listing of tour dates can be found below.

To ensure fans get tickets in their hands directly, Fan Registration is available HERE for the 2019 tour dates until 8pm local time Saturday December 1, through Ticketmaster’s Verified Fan program; supplies are limited (not available for the July 5-6 concerts at Folsom Field).

Every Dead & Company Summer 2019 ticket comes with a recording of the show.  Hold on to your tickets, and don’t forget to scan your ticket barcode at nugs.net/scan to get your show minutes after it ends. 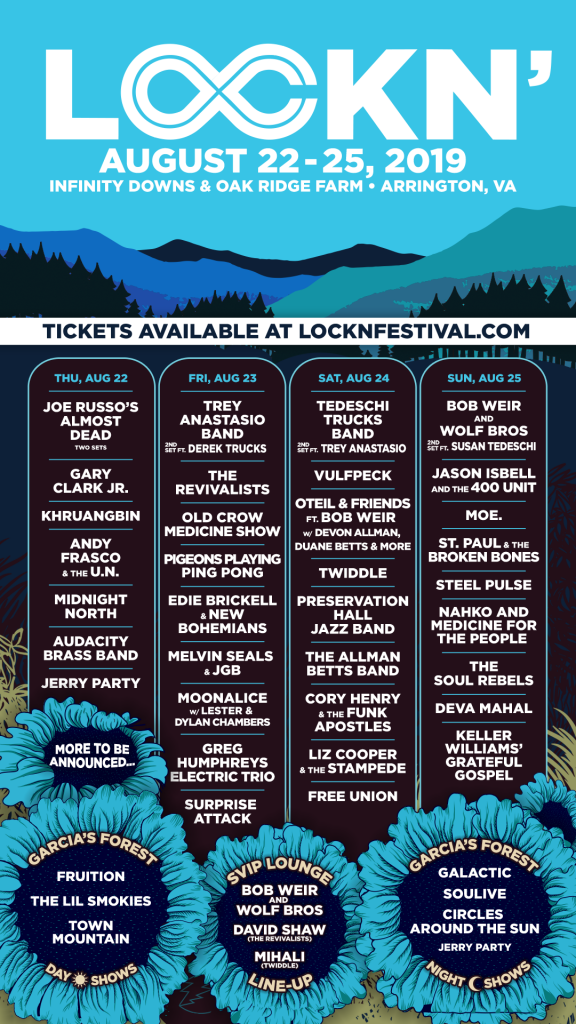 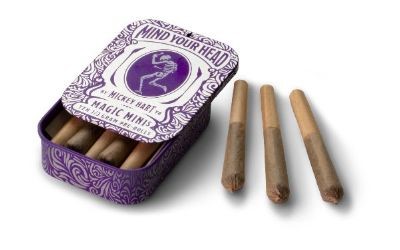 One of the most influential strains in history born when a cannabis breeder by the name of Chemdog was following the Grateful Dead in 1991. He bought some of “the best weed he’d ever smoked” on Shakedown Street outside the Deer Creek Amphitheater in Indiana. Tracking down the growers, his next bag included 13 now legendary seeds. Chemdog is a potent heirloom hybrid with deep cerebral energy. Inspire your mind with the legendary strain that begat other greats such as Sour Diesel and OG Kush.

Let’s put our heads together.
Hop on the bus with us! I’m driving so it should be an adventure. Along the way you’ll get access to special content and be first to catch Mind Your Head news and exclusives.

The European shows are as follows:

ANN WILSON OF HEART
TODAY RELEASES “I AM THE HIGHWAY”
AS FIRST TRACK FROM HER NEW ALBUM
‘IMMORTAL’
DUE OUT SEPTEMBER 14 ON BMG
ANN’S HEADLINING DATES START TONIGHT,
AFTER WHICH SHE JOINS THE SUMMER-LONG
“STARS ALIGN TOUR”
WITH JEFF BECK AND PAUL RODGERS BEGINNING JULY 18

Photo Credit: Kimberly Adamis
ANN WILSON of HEART, one of rock’s most distinctive and powerful vocalists, has released “I Am the Highway” as the first track from her new album that’s due out September 14 on BMG. Fittingly titled IMMORTAL, the album features 10 musically diverse tracks that pay tribute to some of ANN‘s influences and friends who’ve recently passed and whose music poignantly lives on.
“I Am The Highway”–originally an Audioslave song that was sung by the late Chris Cornell and written with his bandmates–was released today (July 6) across all digital platformsafter its premiere yesterday at RollingStone.com. The song is also available as an instant-grat track with album pre-orders, starting today; click here to access.
“The song is strong, confident, spiritual,” says the iconic Rock and Roll Hall of Fame inductee of “I Am The Highway.” “It’s about a person who refuses to be tied down to the mundane, who is constantly looking for freedom and independence on a more universal scale, not just ordinary everyday reality. It was the cry of a soul, and it’s a beautiful song. Chris and I were friends; we had a lot in common, we were both outsiders in a way. He left us with amazing music.”
For IMMORTAL, which marks her debut for BMG, ANN has teamed with original Heart producer Mike Flicker (Dreamboat Annie, Magazine, Little Queen, Dog and Butterfly and Bebe Le Strange, among others). “Mike was the first producer to believe in me,” ANN says. “He was my first teacher in the studio and knows how to provide that special support needed to bring out my soul in the recording process. It is exciting to work with him for the first time since 1980. I have traveled many, many miles since then but the old feeling is still there and fresh on Immortal. He has fearlessly helped me bring my ideas to life once again and it’s been a great collaboration.”
ANN chose the album title IMMORTAL after revealing some working titles early on in the project. “The original working titles evolved as the concept for the album evolved; a little bit at a time,” explains ANN. “As my understanding of what I had undertaken grew and clarified, I realized a larger truth; that the souls may have departed but the songs will forever be their resonances. These are the poets of our time and their expressions must be handed down. Poetry is lasting and elemental like carvings in rock.”
The finely etched tracks that comprise IMMORTAL cover a lot of musical ground, with many highlights including songs by Leonard Cohen (“A Thousand Kisses Deep”), Amy Winehouse (“Back to Black”), David Bowie (“I’m Afraid of Americans”), Lesley Gore (“You Don’t Own Me”) and Tom Petty (“Luna”). ANN says the criteria for choosing this collection of songs was easy. “First of all, I had to LOVE them! They had to be songs I could get inside of authentically as a singer. Lyrics are important to me but the most important thing is always the marriage of words and melody that makes the song magic!”
With sexism at the forefront of the national conversation, ANN says this did factor into the inclusion of “You Don’t Own Me” by Lesley Gore. “‘You Don’t Own Me’ was originally an early feminist anthem in the 1960’s and ’70’s. Since then the idea of self possession has grown to be more universal…This song is about refusing to be objectified and owned. By anyone.”
IMMORTAL includes some very special guests as well. “Warren Haynes plays on Tom Petty’s ‘Luna’ and ‘You Don’t Own Me,'” ANN reveals. “Ben Mink is featured on Leonard Cohen’s ‘A Thousand Kisses Deep’ and Amy Winehouse’s ‘Back to Black.’ They are both musicians and great people whom I admire. It’s always a pleasure and an honor to work with them. Their souls shine through on these songs!”
The full IMMORTAL track listing is as follows:
“You Don’t Own Me” (Lesley Gore)
“I Am the Highway” (Chris Cornell, Audioslave)
“Luna” (Tom Petty)
“I’m Afraid of Americans” (David Bowie)
“Politician” (Cream) in honor of Jack Bruce
“A Thousand Kisses Deep” (Leonard Cohen)
“Life in the Fast Lane” (Joe Walsh, The Eagles) in honor of Glenn Frey
“Back to Black” (Amy Winehouse)
“A Different Corner” (George Michael)
“Baker Street” (Gerry Rafferty)
ANN‘s headlining solo dates start tonight (July 6) in Snoqualmie, WA and run through July 15 in Aspen, CO. Then, she joins the much-anticipated “Stars Align Tour” with Jeff Beck and Paul Rodgers, which kicks off July 18 in West Valley City, Utah and stops in over 20 cities across the U.S. and Canada including Dallas, St. Louis, Chicago, Toronto and Nashville, before wrapping August 26 in Tampa. ANN‘s set list this summer will include songs from IMMORTAL. The songs will also be featured in ANN‘s first-ever solo television special (details TBA), taped this past Aprilat the Arcada Theatre in St. Charles, IL, to coincide with the album’s release.
ANN WILSON‘s upcoming tour dates are as follows:
WEBSITE
FACEBOOK
TWITTER
INSTAGRAM

Win the ultimate Dead & Company Experience! With a $10 donation to our partners REVERB and HeadCountOrg, you will earn 100 entries for you and a friend to win a trip to see both shows at Folsom Field in Boulder, CO in excellent seats reserved for the band’s guests, check out a sound check, see a couple tunes from the side of the stage, VIP access to Loose Lucy’s Lounge, and go home with a custom D’Angelico guitar signed by the band!  Don’t miss out!

All Summer 2018 Dead & Company tickets come with a recording of the show included in the ticket price. Get the nugs.net app for iOS and Android to scan your ticket and listen on demand any time, or scan your ticket barcode at nugs.net/scan to add add the free audio stream to your nugs.net stash! No subscription necessary. 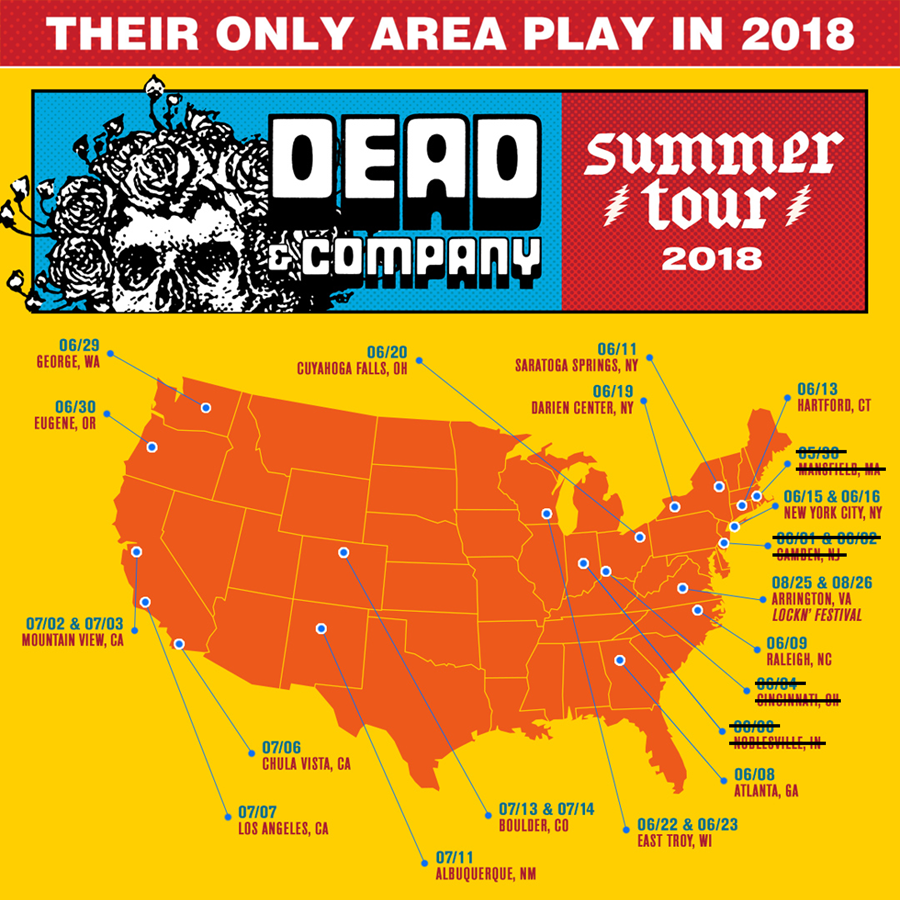 Dead & Company has once again partnered with CID Entertainment to offer VIP Experiences & Seamless Packages on tour including a premium concert ticket with early venue entry, a limited edition, screen printed poster and a commemorative concert ticket and case.

SET FOR FESTIVAL APPEARANCE TONIGHT IN JACKSONVILLE, FL AT WELCOME TO ROCKVILLE 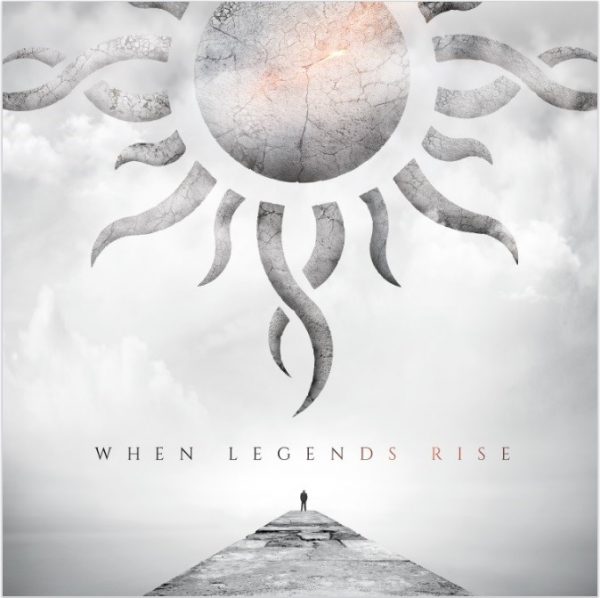 Multi-platinum band GODSMACK, today (4/27), have released WHEN LEGENDS RISE (via BMG), marking the band’s seventh studio album and their first in four years. The 11-song collection features the Top 5 rock song “Bulletproof” and title track, “When Legends Rise,“ which premiered recently (4/13) with Billboard.com alongside an interview with GODSMACK’s SULLY ERNA. In addition, “When Legends Rise” will serve as a theme song for WWE’s “Greatest Royal Rumble” event, which streams live today at noon ET on WWE Network. WHEN LEGENDS RISE is available on CD, LP and Digital. Purchase or Stream it here.

Earlier this month, GODSMACK released the official music video for “Bulletproof.“Directed by filmmaker Troy Smith, the song’s video is a short film that parodies the making of a rock video with cameos from Billy Ray Cyrus and Sebastian Bach. SULLY ultimately hires his crazy Italian cousin to direct the video and everything goes wrong.Click hereto watch.

Tonight, the band–SULLY ERNA [vocals, guitar], TONY ROMBOLA [guitar], ROBBIE MERRILL [bass], and SHANNON LARKIN [drums]–will kick off their 2018 live shows in Jacksonville, FL headlining at Welcome to Rockville, the first of seven U.S. festivals the band will perform at through July 14. Next up is their co-headlining six-week outdoor amphitheater tour with Shinedown which kicks off July 22 and hits more than 30 cities (see all dates below).

20 years since the release of their debut album and 20 million album sales later, GODSMACK are an even stronger animal than before. The proof is in the grooves of WHEN LEGENDS RISE. 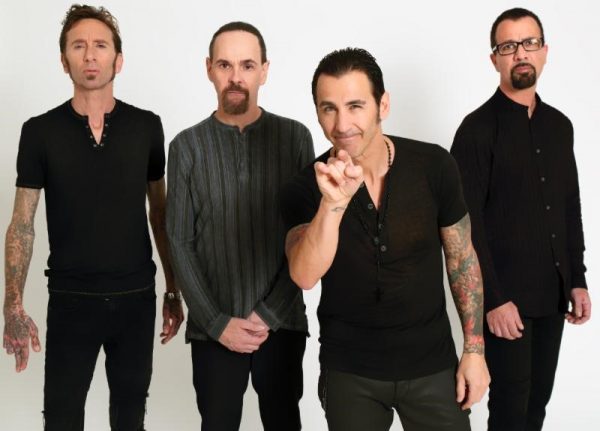 For more information on GODSMACK, visit:

An eye for an eye only ends up making the whole world blind.
Mohandas Gandhi
Powered By: WordPress Quotes
©2001-2018 King Idea Productions, All Rights Reserved. Website by Norman Sands