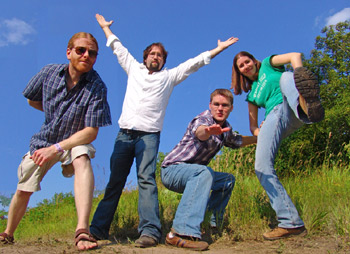 Family Groove Company is a four piece band from Chicago that is turning heads and catching ears with a sound that is uncannily fresh, and live performances that simply envelop audiences in the fun, excitement and passion that the band radiates from the stage. Growing audiences everywhere FGC plays attest to the impact the band is making, as they bring the excitement of their live performances to ever growing venues, in more and more cities across the country. Appearances at most of the Midwest’s major music festivals (Summer Camp, 10,000 Lakes, Summerfest, Wakarusa) have helped along the way, the band’s steady shift from club dates to small theaters and music halls points to the great things to come, and the over 50,000 live CDs that have been distributed and traded all over the country speak for themselves. Family Groove Company is a band that music fans should not miss.

FGC integrates the groove sensibility developed by funk/jazz crossover artists like Herbie Hancock and Medeski, Martin, and Wood, with thoughtful, tight song writing that takes cues from the likes of Steely Dan and the Beatles. The result? An infectious, fresh sound the band calls “groove informed jazz/rock”. 2008 marked the release of not one, but two FGC records – the band’s first official live album, Live in Chicago (February), and the band’s third studio record, Models and Metrics (October). Live in Chicagocaptures the band where they are most comfortable, on stage in front of a live audience, and offers listeners a taste of the extraordinary experience fans have been enjoying at FGC performances for several years now. Models and Metrics represents the strongest statement FGC has made with a record to date. The album delivers high-energy rockers, touching moments of introspection, extraordinarily tight ensemble playing, and profoundly engaging twists and turns, both musically and lyrically. 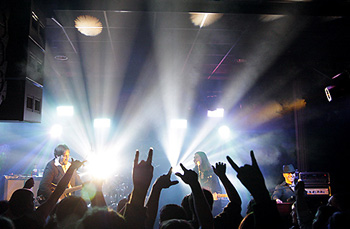 Based out of Chicago since October 2002, Family Groove Company averages over 100 performances a year, reaching major markets in the Northeast, South, Midwest, and as far west as the Rockies. However, FGC actually traces its earliest beginnings to Los Angeles, CA. In January 2001, guitarist Adam Lewis and keyboardist Jordan Wilkow met bassist Janis Wallin and drummer Mattias Blanck while studying music at the Musicians Institute in Hollywood. The chemistry between the four musicians was felt instantly, and it wasn’t long before they recorded their first demo and began performing throughout Southern California. A tour of the entire West coast followed shortly thereafter, and in spring 2002, the band released their 10-track debut album, Reachin’. Extremely proud of their first studio effort, Reachin’ reflects FGC’s commitment to conscientious song craft, and the band’s determination to offer material of compositional interest along with their solo/improv ideas.

With the number of markets available to the band limited by the vast expanse of the West, in the summer of 2002 FGC made the big decision to relocate to Chicago. Since fall ’02, the band has maintained an aggressive touring schedule that has included tremendous headlining performances and high profile festival appearances all over the country. In April 2006, FGC released their second studio album, The Charmer, and took another step toward delivering their collective sonic vision. Jazz harmonic ideas encounter thick grooves, and improvisation negotiates tight song writing, as each track brings shape and contour to the band’s sound. A fierce attentiveness to composition complements FGC’s passion for improvisation, and with The Charmer the band offered a sound that captivated audiences ranging from the most casual music fan to the most critical musician. Janis, Jordan, Adam, and Mattias all remain in passionate pursuit of the cultivation and refinement of FGC’s sound, and are extremely excited about what’s in store for the band in the coming years.